Search Site
Menu
Call For Consultation 551-245-8894
Home / Blog / What Is the ABC Test for Classifying a Worker as an Independent Contractor?

What Is the ABC Test for Classifying a Worker as an Independent Contractor? 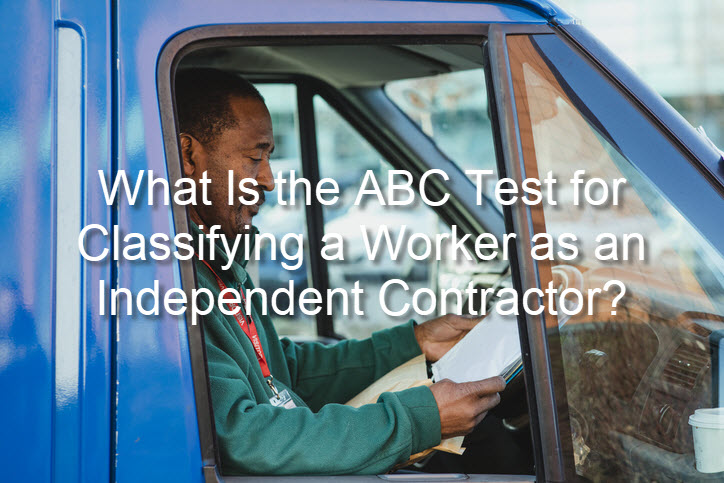 The difference between an independent contract and an employee is a major point of friction in employment law. Companies often misclassify workers as independent contractors, either intentionally or by mistake. When done intentionally, it’s usually an effort to save money by not having to pay for a worker’s health insurance and other benefits and not paying into the state unemployment fund. Since misclassification violates wage and hour law, employers must meet a heavy burden — known as the ABC test — to establish that the people who perform work for them are independent contractors and not employees.

The ABC test is a three-part analysis. An employer challenging the classification of a worker as an employee must satisfy all three parts of the test, namely:

A recent New Jersey Supreme Court decision, East Bay Drywall, LLC v. Dept. of Labor and Workforce Development, underscored the importance of Part C of the test. The court said that when trying to decide whether a worker is truly independent, one must think about what would happen if the relationship between the worker and the company ended. If quitting or being fired would cause the worker to “join the ranks of the unemployed,” then that worker is probably an employee, not an independent contractor. On the other hand, if the worker could leave or be fired and still have work to do for other entities, that is evidence that the worker is running their own independent business, so a contractor classification could be appropriate.

The court emphasized that the ABC test applies to independent contractors in all industries. It specifically mentioned the construction industry, which is known for its use of contractors, subcontractors and sub-subcontractors. Construction workers, the court said, are particularly vulnerable to being misclassified by employers who try to avoid paying benefits and unemployment compensation. These attempted classifications are often sources of employment litigation.

At Deutsch Atkins & Kleinfeldt, P.C. in Hackensack, our New Jersey employment lawyers are highly experienced in employee misclassification claims. We help workers take on their employers and assert their legal rights. If you have questions or concerns about being classified as an independent contractor, please call our Hackensack office at 551-245-8894 or contact us online to arrange a confidential meeting.