Neil H. Deutsch has been practicing law for over 35 years and is known as a skilled negotiator in employment and discrimination law. He believes in a bottom-line approach of risk analysis and cost effectiveness for his clients.

“Case evaluation is something we take seriously,” says Mr. Deutsch who seeks top net dollar for his clients while making all efforts to “get it done early” so that clients don’t go through a long and drawn out litigation. “We believe in negotiation before litigation.” Of course, if litigation is the inevitable course of a case, he has a record of success for clients.

“There’s something noble about fighting for the underdog,” he says. “You can do good and do well. And you can help people feel vindicated when bad things happen to good employees.”

Mr. Deutsch and Bruce L. Atkins founded Deutsch Atkins & Kleinfeldt, P.C. in 2006. Prior to that, Mr. Deutsch, the host of a radio show, The Employee Rights Forum, headed a firm of 10 lawyers, paralegals and support staff that focused solely on employment and discrimination law. Before entering private practice, Mr. Deutsch served several major corporations, including Dairylea and Panasonic, as Associate General Counsel. He served as General Counsel to Patent Scaffolding, a construction products division of a Fortune 300 company. During this period, he handled employment discrimination matters and negotiated and administered union contracts, among other responsibilities. Mr. Deutsch therefore brings an understanding of both the employer and the employee to the practice of plaintiff’s work.

Mr. Deutsch has litigated many cases to favorable verdicts for his clients. Several of those cases have set precedent and been published. One, which reached the New Jersey Supreme Court, made it clear that plaintiffs are entitled to a jury trial even if their performance is lacking, so long as there is evidence of discrimination. Another established the principal that if independent contractors have been dismissed for a discriminatory reason, they, as well as employees, may assert claims under the New Jersey Law Against Discrimination. 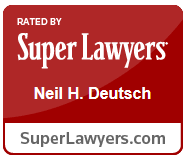