Bruce L. Atkins is regarded as one of New Jersey’s premier practitioners of employment and civil litigation. He has been selected to the New Jersey Super Lawyers prestigious list every year since 2005.  This honor, bestowed upon a recipient by the votes of his peers, is a powerful nod to the skill Mr. Atkins brings to the area of employment law.

Mr. Atkins believes employees have rights that should be aggressively pursued when an employer has wrongfully dealt with an employee. He brings this philosophy to his practice when considering each case and its potential outcomes. “The practice of plaintiffs’ employment law has allowed me to pursue the ideals that I graduated law school with by helping ordinary people win against large companies,” Mr. Atkins says.

A member of the New Jersey, New York, and Florida bars, Mr. Atkins has had several major reported cases in the Supreme Court and the Appellate Division of the State of New Jersey. He has been admitted to practice in the State Court of New Jersey, the Federal Court of New Jersey, the Southern and Eastern Districts of New York and the U.S. Court of Appeals for the Third Circuit, as well as the State of New York, the State of Florida and the U.S. Supreme Court. In addition, he has tried numerous cases in the State and Federal Courts in New Jersey as well as in Federal Court in New York. He obtained one of New Jersey’s largest verdicts in a single plaintiff discrimination case in the amount of $6.5 million which included $1.5 million in Compensatory Damages and $5 million in Punitive Damages. The Court also awarded $638,000 in counsel fees and costs. That verdict was upheld on appeal. He recently obtained a $935,000 jury verdict plus attorney fees which was also upheld on appeal in July 2019.  He has extensive experience in commercial litigation, partnership and shareholder disputes, dissolutions as well as restrictive covenant and non-compete matters.  He is also a court certified mediator and has handled numerous mediation matters.

In 2008, he was invited to become a Fellow in The Litigation Counsel of America (LCA), a close-knit, peer-selected, and aggressively diverse honorary society of 3,500 of the best trial lawyers you will find anywhere.  The LCA makes up less than one-half of one percent of American lawyers, vigorously vetted for skills, expertise, and service.  In 2019, he was selected to National Trial Lawyers Top 100 – an invitation-only organization composed of the premier trial lawyers from each state or region who meet stringent qualifications as civil plaintiff and/or criminal defense trial lawyers.

He has published several articles in well-known law journals including “Oral Employment Contracts Under New Jersey Law,” “Are Employees Still Second Class Citizens,” Labor and Employment Law Quarterly (1994) and “Complete Anti-Discrimination Policies: The Key in Business Insurance,” Crain’s publication (October 1997).  In addition, he has been a guest lecturer at both NELA’s national convention and at NJAJ on trial techniques and at Lorman and ACI seminars on employment issues.  From the early 2000’s through 2008, he made frequent television appearances as commentator on Court TV. He has served on the New Jersey District IIB ethics committee and is currently serving on the New Jersey District IIA ethics committee.

A graduate of Seton Hall Law School, Mr. Atkins is also a graduate of the University of Connecticut. Mr. Atkins is the senior managing partner at Deutsch Atkins & Kleinfeldt P.C., which is one of the premier plaintiff employment law firms in the tri-state area. 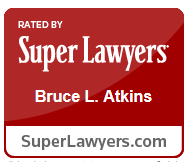 *Disclaimer – No aspect of this advertisement has been approved by the Supreme Court of New Jersey. Super Lawyers is a Thomson Reuters rating service. For details of the selection process go to www.superlawyers.com/about/.