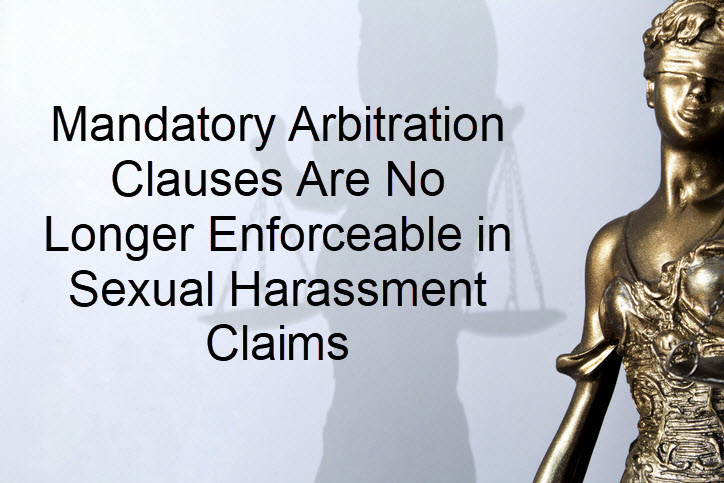 In New Jersey as in other states, employment contracts increasingly are including clauses that mandate arbitration as the forum for settling disputes. Despite the advantage that arbitration typically gives an employer, prospective employees often are put in the position of agreeing to the terms or looking elsewhere for employment. Although mandatory arbitration clauses are generally upheld by the courts, a federal law provides that these clauses do not apply to sexual harassment or sexual assault claims.

The “Ending Forced Arbitration of Sexual Assault and Sexual Harassment Act,” enacted in 2021, came in response to a conflict between state and federal laws. Several states passed laws voiding agreements that waived certain employee rights, such as the right to sue over discriminatory actions. New Jersey’s Law Against Discrimination was amended in 2019 to add such a provision. But the Federal Arbitration Act (FAA), which declares compulsory arbitration agreements valid and enforceable, has been held to take precedence over state law. Under the 2021 federal law, the LAD’s anti-waiver provision can stand.

There is a vast difference between defending against a sexual harassment claim in an arbitration as opposed to litigating one in court. For employers, arbitration offers these advantages as compared with litigation:

With this sea change in how sexual harassment claims can be adjudicated, employers will need to rethink their policies. This may include carving out exceptions to employment agreements mandating arbitration of disputes. Employers may still ask employees to consent to arbitration when a dispute arises.

Employment discrimination claims can be complicated to evaluate and prove. This is particularly true when there are allegations of sexual misconduct, which are typically based only on a claimant’s testimony. The new law provides a wider range of legal remedies for employees suffering sexual harassment or assault.

The New Jersey employment attorneys at Deutsch Atkins & Kleinfeldt have the knowledge, skills and dedication to give your sexual harassment case the special attention it deserves. Contact us online or call us at 551-245-8894 to set up an initial consultation at our Hackensack office.