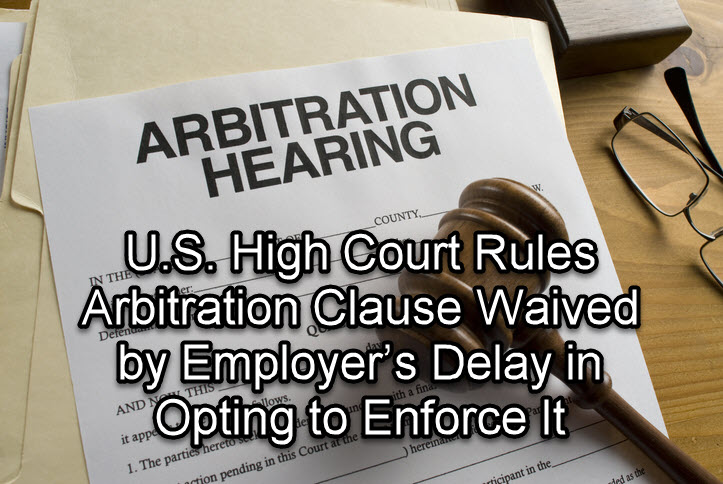 Arbitration provisions in employment agreements require employees to have their disputes decided by private judges, usually of the employer’s own choosing, rather than go to court. Employers generally benefit from these clauses. But the U.S. Supreme Court has now ruled that an employer might waive its right to compel arbitration by not making a timely demand.

The case, Morgan v. Sundance, was brought by Robyn Morgan, who worked at a Taco Bell franchise owned by Sundance. Her job application contained a clause requiring her to submit any disputes to individual arbitration. The Supreme Court has upheld the validity of these clauses under the Federal Arbitration Act. But when Morgan filed a suit alleging that Sundance was violating federal wage-and-hour laws, Sundance waited eight months before demanding arbitration. During those months, the parties began litigation and had even gone as far as discussing settlement. Only after settlement talks failed did Sundance attempt to force the issue to arbitration.

The Eighth Circuit Court of Appeals ruled in favor of Sundance, stating that Morgan was not prejudiced as a result of the delay. The Supreme Court, however, said that Morgan was not required to demonstrate prejudice because arbitration contracts are treated the same as other types of contracts, and other breach of contract cases don’t require a showing of prejudice. Justice Elena Kagan wrote that “a court may not devise novel rules to favor arbitration over litigation.”

At Deutsch Atkins & Kleinfeldt, P.C. we welcome the Supreme Court’s decision in Morgan and the victory it represents for workers’ rights. As advocates for fair treatment of workers, we have seen firsthand how arbitration can be used to prevent employees from fully asserting their rights. We are pleased that under this new ruling, companies may not proceed with litigation, engage in settlement talks and then try to compel arbitration months later.

If you work in New Jersey or New York and believe your employer has underpaid you or has otherwise violated employment laws, reach out to our lawyers for help. You can call us at 551-245-8894 or contact us online to schedule a meeting at your convenience.