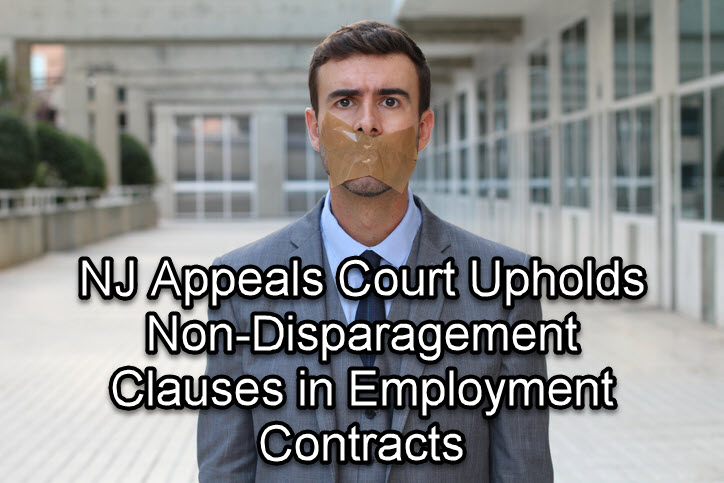 A recent decision by a New Jersey appeals court upholds the enforceability of contract provisions that forbid employers or employees from disparaging or impugning each other’s reputation. The ruling is notable because the court distinguished non-disparagement clauses from nondisclosure agreements (NDAs), which in many cases are unenforceable against employees or former employees under NJ law.

The case, Savage v. Township of Neptune, began when police officer Christine Savage sued the township and its police department for alleged sexual harassment, discrimination and retaliation, all of which violate the New Jersey Law Against Discrimination (NJLAD). Eventually, the parties negotiated a settlement. The settlement included this provision: “The parties agree not to make any statements written or verbal, … regarding the past behavior of the parties, which statements would tend to disparage or impugn the reputation of any party….”

A few months after signing the settlement, Savage gave a TV news interview in which she stated her opinion that the Neptune police department hadn’t changed. It was still “a good ole’ boys system,” she said. The department filed a motion to enforce the non-disparagement clause, arguing that Savage’s statement breached it. The trial judge ruled in the department’s favor. Savage appealed.

In upholding enforcement of the clause, the appeals court ruled that non-disparagement provisions are different from non-disclosure agreements. Due to a 2019 amendment, the NJLAD invalidates — as a violation of public policy — any provision in an employment contract or settlement agreement that has the purpose or effect of concealing the details of a claim of discrimination, retaliation or harassment. By contrast, the court noted, a non-disparagement clause only prohibits the parties from publicly communicating anything negative about each other. It does not explicitly prohibit discussing the details of a court settlement or of the underlying claims.

While upholding the clause, the court ruled that Savage did not violate it. Her comments were about the current state of the police department. The non-disparagement clause only prohibited her from commenting about the department’s past behavior.

In response to the court’s ruling in May, two state senators introduced a bill in June that would make non-disparagement agreements in settlements and employment contracts unenforceable. We will need to wait and see whether the bill gets any traction.

For now, it is important for employees to understand that companies have the right to insist on a non-disparagement agreement as part of a severance package, employment contract or settlement agreement. They cannot, however, include an NDA. It can be very difficult to recognize the difference between an NDA and a non-disparagement clause, so you should not sign anything until you have had the documents reviewed by an experienced New Jersey employment lawyer.

At Deutsch Atkins & Kleinfeldt, P.C. our team has decades of experience representing employees across New Jersey. Our attorneys will help you understand your contractual rights and protect you at every turn, including in court if necessary. Call our Hackensack office at 551-245-8894 or contact us online to schedule a consultation.