Revision to NJ Law Gives Protection to Workers 70 and Older 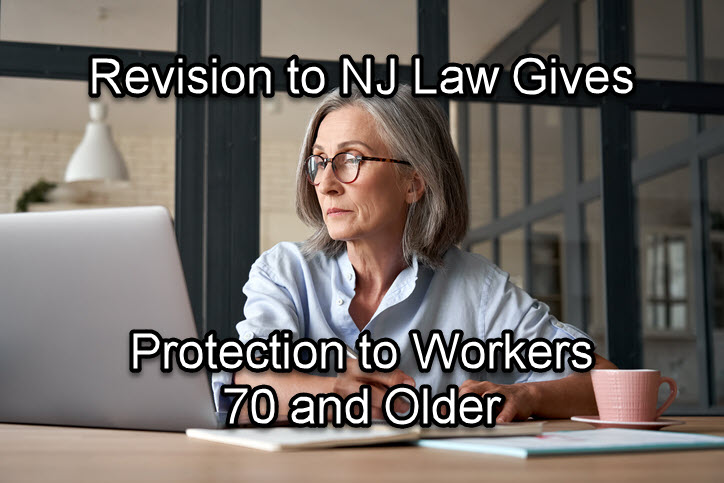 It has long been the case that employees who reach a certain age may legally be denied employment or job promotions and, in some cases, be forced to retire. However, in New Jersey, that changed in 2021.

The state’s Law Against Discrimination has long prohibited age discrimination, but workers 70 years of age and older did not benefit from this protection. Employers were allowed to deny jobs or promotions to individuals who had reached their 70th birthday. Likewise, institutions of higher learning were permitted to force tenured employees into retirement at that age.

An act amending the law signed by Governor Phil Murphy on October 5, 2021 eliminates these exceptions. The statute declares that almost all employees working for private employers (other than domestic workers, who are not covered by the Law Against Discrimination) cannot be pushed out of a job or denied an employment opportunity due to their age.

In addition, the newly enacted provision bars any state or local government employees, with the exception of members of police and fire departments and certain judges, from being forced to retire, unless the public employer can show that the employee is unable to perform their duties. Previously, New Jersey law allowed a public employer to force its employees to retire at a particular age if it could show that the retirement age bore a “manifest relationship to the employment in question.”

Finally, the revised law expands the remedies available to employees forced into retirement in violation of the Law Against Discrimination. Previously, the only remedy was reinstatement with back pay, whether the employee worked for the state, a local government or a private employer. Now, employees of private employers may also sue in court for any damages authorized by law, including reasonable attorney fees and legal costs.

If you suspect that you might be the victim of unlawful age discrimination or any other kind of job-related biased treatment in New Jersey, you can consult with a knowledgeable and skilled employment discrimination attorney at Deutsch, Atkins & Kleinfeldt, P.C. We are located in Hackensack and can be reached by contacting us online or calling us at 551-245-8894.